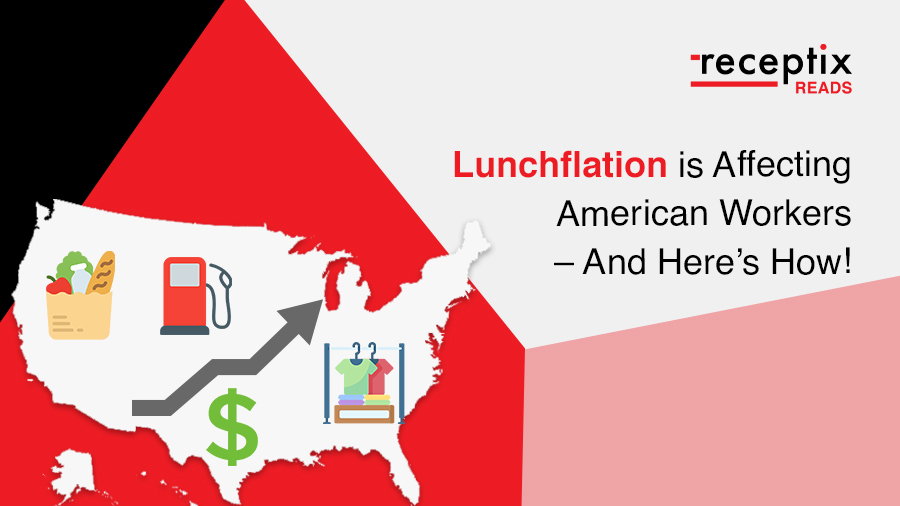 With Covid not going anytime soon, the world has learned to live with it, and pre- pandemic normalcy is gradually returning, but the economic environment is not just the same.

While transiting back to work from the office after two years of remote working is proving challenging for employees, there’s another cause of worry, making the life of employees all the more difficult, and it’s called Lunchflation.

The term is coined by CNN and refers to the increase in prices of food, beverages, commute, and daycare facilities, creating a severe dent in the pocket of employees returning to the office.

According to CNN – Due to inflation, the workers’ daily expenses aren’t keeping up with their earnings.

Lunchflation starts right from the commute. With the gas prices hitting record highs due to the Russia-Ukraine war, the commute cost has risen. As per AAA, the national average of regular gasoline for a gallon now is $4.60. However, in February 2020, it was $2.44.

Even the price of food has gone up. As per the Labor Department, food prices shot by 9.4 percent in April 2022, which is the biggest jump since April 1981.   Starbucks has raised its prices in the US, and the prices could go further up reports CNN.

Salad chain Sweetgreen has also raised its menu prices by 10 percent. Subway, Shake Shack, and Wingstop have all increased their menu prices. A similar trend is being witnessed across various restaurants in the US.

As per the Wall Street Journal – as a result of Lunchflation, people are finding a rise of $4 to $10 in their usual lunch orders. As per the data, the price of wraps has increased by 13%, while the price of sandwiches rose by 14%. Taco prices have also escalated, and

now consumers are paying 19% more. The price of salad bowls costs 11% more than it did two years ago, per Square.

And inflated lunch prices can prevent workers from eating out with their colleagues putting a strain on their working relationships.

Today.com says – experts are advising workers to bring their lunches to save money. However, even the grocery prices have gone up by 8.6 percent as compared to the last year.

As per a study by Square, a payment company, record-breaking prices are shocking people across several major US cities including San Francisco, Austin, New York, Chicago, Dallas, Houston, Atlanta, Seattle, and Washington DC.

All this comes against the backdrop of US inflation, which is the highest since February 1982, with the price hike affecting the cost of gas, food, and rent.

Now that people have started going to the offices, they need to update their wardrobes and buy makeup essentials. They will also have to shell out money for salons. Things that were on pause for the last two years have now become expensive. As per the report, apparel prices shot up 5.4% in April from the same time a year ago.

Child care costs, which happens to be one of the highest expenses for working parents have also increased. As per Child Care Aware of America, in 2020, the national average annual cost of child care was $10,174. However, the prices have now gone up affecting the pockets of working parents.

Why is lunch becoming costlier?

The rise in lunch prices is the byproduct of global inflation.

Restaurants have been the highest-hit businesses over the past few years and due to the soaring costs of grocery, labor shortage, and supply chain disruptions, they are paying more everywhere. During a pandemic, a record number of laborers left the industry because of low wages, lack of benefits, and poor working conditions.

Now the national labor shortage means restaurants have to offer more wages to attract staff. Supply chain constraints have further plagued the US economy, driving up the price of key commodities. And droughts in countries like Brazil and Argentina have also increased the prices of corn, coffee, and soybeans.

While most companies are welcoming back their employees to their desks, they should also consider various challenges faced by the employees before implementing full-time work from the office. Companies should choose the work model that would work the best for them and their workers resulting in a happy workforce and higher productivity.