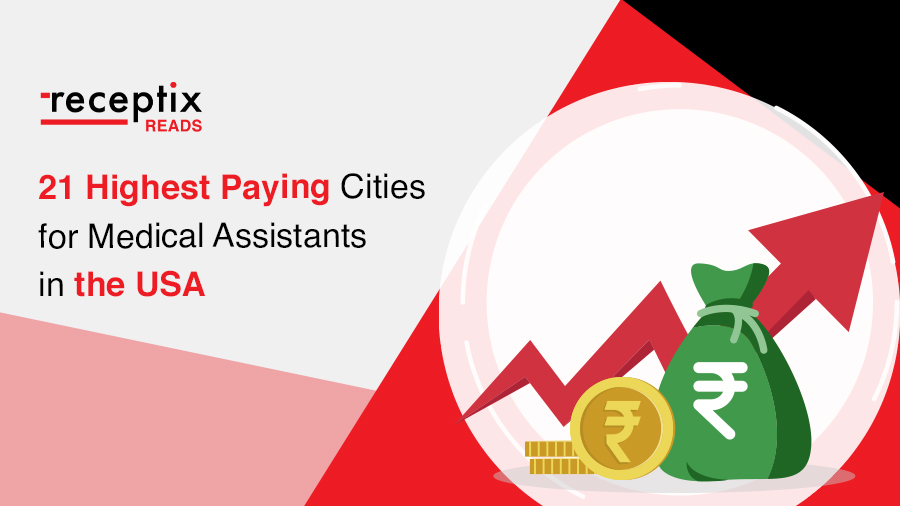 by Nidhi Rajput
with no comment
Job & Salary
Views - 422

Medical assistants play a vital role in the healthcare industry. These professionals assist doctors in clinics and medical offices. They are cross-trained to perform administrative and clinical duties and are responsible for maintaining and updating patients’ records and keeping track of tasks that involve patient interaction. They also handle correspondence, billing, and bookkeeping.

As per the United States of Labour Statistics – medical assisting is one of the nation’s careers growing much faster than average due to technological advancements, a surge in the number of physicians and outpatient care facilities, and a growing number of elderly Americans who need medical treatment.

Cedar Rapids take number one place when it comes to medical assistant salary in the United States. Cedar Rapids is the economic hub of the state, and for five years in a row, it has been ranked as the best place in America for kids. The city occupies the 11th spot in the top American cities to live after the pandemic.

There are various other reasons why medical assistants should choose this city for their career. The average salary for medical assistants in Cedar Rapids is – $38,030. However, for some people salaries can reach as high as $48,830 or more.

The second city in the United States paying high salaries to medical assistants is Lincoln, Nebraska. It is one of the most populous cities in the state, known for various attractions. Healthcare and medical jobs account for a sizeable portion of Lincoln’s employment.

Greensboro is a bustling destination, known for its stadiums, fields, and other athletic spots. The city also features artistic venues, historical sites, and lush green spaces. Greensboro is enjoying a newfound reputation as a great place for young people. The top industries in the city are – education and health services.

Fargo is known for its food, art, and culture. It is an upcoming city attracting a lot of young population, which is moving to settle in the area. The city is also an educational, and industrial center for eastern North Dakota and northwestern Minnesota. The largest employers here are – Sanford Health and Essentia Health.

Thinking how much does a medical assistant make here? Medical assistants in Fargo make an average salary of $38,770. Some of these professionals earn salaries as high as $48,830 and even more.

Omaha is the largest city in Nebraska on the Missouri River. The city is known for its pioneering history, museums, and cultural centers.

Modesto is a Spanish word for modest. The city is located in the Central Valley, 68 miles south of Sacramento. Modesto has been honored as a Tree City USA numerous times. Modesto is surrounded by rich farmland and is home to Gallo Family Winery, the largest family-owned winery in the United States. Agriculture and wine are the top industries in the city.

Medical Assistants in Modesto earn an average salary of $37,510. Some of these professionals get paid as high as $51,360 or more.

Green Bay is the third-largest city in the state of Wisconsin, and the third-largest city on Lake Michigan, after Chicago and Milwaukee. The city is home to a popular sports team – the Green Bay Packers. It’s also the headquarters of Bellin Health and Prevea Health, regional health care providers. A cheaper cost of living and bustling economy makes it a desired destination for medical assistants.

Boise is the capital and the most famous city in the US state of Idaho, having a beautiful setting in the Rocky Mountains. Boise River Greenbelt is one of the city’s most lush parks featuring a 25-mile tree-lined pathway. Natural attractions are hard to miss in Boise. The city is both urban and wild. Modern Boise is also an artistic hub for the northwest. French-inspired bistros, green areas around every corner, and hiking and skiing opportunities a few miles away make Boise an appealing destination.

Some of the biggest employers here are – St. Luke’s Health Systems and the Saint Alphonsus Health System. Medical Assistants in Boise make an average salary of $35,710. Some medical assistants also earn as high as $45,270.

Milwaukee is the largest city in the state of Wisconsin in the United States.  It is located 100 miles from the great city of Chicago, on the bank of Lake Michigan.  Milwaukee is one of the most ethnically and culturally diverse cities in the U.S.

Spokane is the largest city and county seat of Spokane County in Washington, Spokane is the economic and cultural center of the Spokane metropolitan area, The city is known as the birthplace of Father’s Day, locally, the city goes by the  nickname of “Lilac City.” Officially, Spokane goes by the nickname of Hooptown. Spokane lies 92 miles south of the Canada-U.S. border.

Minneapolis–Saint Paul is a metropolitan area centered around the confluence of the Mississippi, Minnesota, and St. Croix rivers in the U.S. state of Minnesota. While Saint Paul is the state capital, Minneapolis is the most populous city in Minnesota.

Medical Assistants in Minneapolis – St. Paul makes an average salary of $42,240. The highest salary they receive is approximately – $51,770 or more.

Cincinnati is Ohio’s third largest city and the largest metro region. It is also known as the “Queen City” or “Queen of the West.” Downtown Cincinnati is surrounded by picturesque foothills that add a fascinating backdrop to the Queen City and its legendary skyline. Cincinnati is a remarkable blend of industry and architecture.

Louisville is the largest city in the Commonwealth of Kentucky and the 28th most populous city in the United States. It is located on the Ohio River and is historically known as the ‘Gateway to the South.’ it has various nicknames including ‘River City’ and ‘Derby City.’ Louisville’s biggest draw is the horse race at Churchill Downs. The city is also known for several Fortune 500 companies, the University of Louisville, and its Cardinals.

Anchorage is the largest city in the US state of Alaska by population. It is a port city. For those who love outdoor activities and are fond of wildlife, glaciers, and parklands, Anchorage is a perfect destination for them to explore. The city is home to the largest hospital in Alaska – Providence Alaska Medical Center.

Oklahoma City is the capital and largest city of the U.S. state of Oklahoma and features one of the world’s largest livestock markets. The city is known for its cowboy culture and capitol complex. Oklahoma is in the center of an active oil field and oil derricks dot the capitol grounds. Some of the city’s top employers include – Integris Health, the University of Oklahoma Health Sciences Center, Mercy Health Center, OU Medicine, and SSM Health Care.

Kansas is the largest city in Missouri by population and area. The city has friendly fun-loving people and a cultural vibe. It’s often been called the “City of Fountains” since it boasts more outdoor water features than any other city. Kansas City is also known for jazz music and architecture. Some of the city’s top employers include HCA Midwest Health System, Saint Luke’s Health System, Children’s Mercy Hospitals and Clinics, and the University of Kansas Hospital.

Abbreviated as ABQ, Albuquerque is the most populous city in the US state of New Mexico. It features a modern downtown area as well as Old Town. There are various state-of-the-art medical centers in Albuquerque. Some of these include the VA Medical Center, Presbyterian Medical Services, Presbyterian Hospital, Lovelace Women’s Hospital, and Heart Hospital of New Mexico.

Ithaca is a city in the Finger Lakes region of New York. Named after the Greek island of Ithaca. It is a college town, featuring Cornell University and Ithaca College. Tompkins Cortland Community College is also located close to it. Ithaca is also famous for numerous gorges, waterfalls, and restaurants.

The average salary of medical assistants in Ithaca is approximately $36,790, and the highest salary is around $48,290 or more.

Rochester is a mid-sized city on the shore of Lake Ontario in the US state of New York. Rochester combines big-city culture and small-city charm.  Rochester has long been known as Kodak Town. It is the gateway to the scenic and culinary delights of New York‘s Finger Lakes region. Rochester is popular for its music, culture, and major festivals. Some of these festivals include – The jazz Festival, Lilac Festival, and Rochester Fringe Festival.

Medical Assistants in Rochester make an average salary of $34,030. Some medical assistants earn as high as $44,940 or more.

Colloquially known as Indy, Indianapolis, is the state capital and most populous city of Indiana in the United States. The city is home to two major league sports clubs – the Indiana Pacers and the Indianapolis Colts. Indianapolis is the 27th largest economic region in the U.S., with health care being one of its base sectors.

How much do medical assistants make in Indianapolis? Medical Assistants in Indianapolis make an average salary of $35,720, and the highest salary is between $43,000 – $44,000.